Instead of using processes, meetings, planning and expert specialists, at DinoBoss games are made by the sheer determination of one man smashing his fists at a keyboard until polygons come raining forth.

The current game in development at DinoBoss is Demon Spore.

Demon Spore is an intense action rogue-like inspired by 80s Monster movies where you have to blast your way through tentacle hell as a failed lab experiment gives birth to a rapidly growing viral horror.

Hang Line is an extreme-physics climbing game where you swing up dangerous mountain peaks and rescue stranded survivors from falling rocks, avalanches and angry goats.
Check it out at www.hanglinegame.com.

Avaialable now for free on iPhone®, iPad® and Android®. 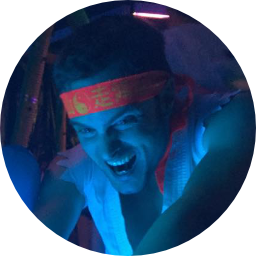 A 17 year game design veteran, Ed Kay has been dreaming of making his own game since discovering the Doom level editor in 1996. But after a career of headshots, explosions and special moves spanning Cthulhu to Bulletstorm, it wasn't until having his dreams shattered from the Lucasarts apocalypse that he decided it was time to escape AAA console development and enter the terrifying world of indie development. And thus DinoBoss was born.

Send me a message

iPhone and iPad are registered trademarks of Apple Inc, registered in the U.S. and other countries. App Store is a service mark of Apple, Inc. Android is a trademark of Google Inc.